To understand how scenes are built, there are 4 main points that we have to go over:

These are the main principles inside a scene that a screenwriter should master according to Robert McKee. He explains them in full detail in his book Story Structure: Substance, structure, style and the principles of screenwriting.

To set up means to layer in knowledge. To pay off means to close the gap by delivering that knowledge to the audience.

To make this work, you need to have planted before the necessary insights along the story.

The setup for Fight Club when Edward Norton discovers that Tyler  is his double, it’s everywhere along the story. From the mere presence of Tyler Durden (Brad Pitt) along the whole story, to the apparitions of Tyler in the frame, and the strange tantrums and reactions of Marla and Edward’s and Tyler’s team…

There are two feelings really and a lot of variations of the following:

The more you have a feeling the less effect it has.

So the important thing here is that you need to balance between what causes pleasure and what causes pain. You go from positive to negative and viceversa. You can go from negative to negative but the difference between them has to be greater. Example: they have a fight (negative) but in the next scene he kills her (negative but much worse. So it seems that a fight seems “positive”)

So let them reveal themselves for what they truly are and let them speak up their mind and take the necessary decision that need to be taken.

For a more detailed explanation do not hesitate and check out the chapter of McKee’s book, Scene Design! 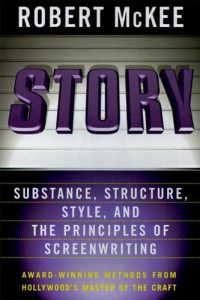